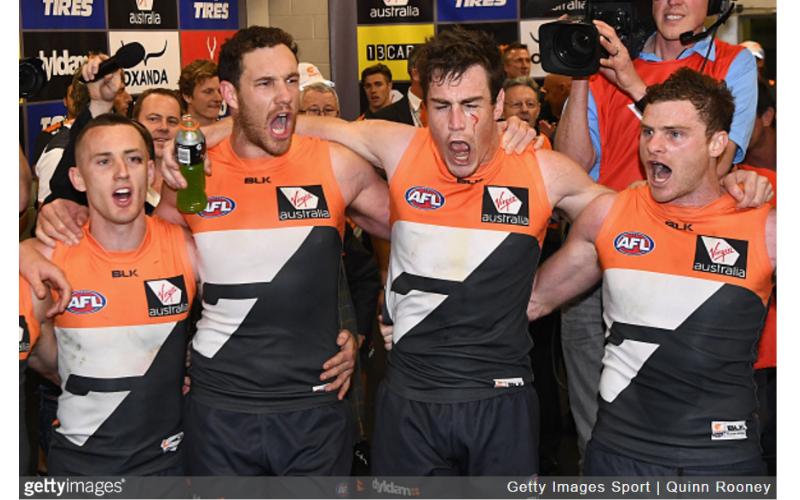 The Giants now have best finals record in the AFL

The Premiership race has been thrown wide open, with a stunning finals debut from GWS in the first ever ‘Battle of the Bridge’ final. Despite going into the game as firm favourites for both this game and the flag, Sydney just didn’t have the answers to the Giants relentless pressure and precise foot skills.

The Giants may have never been in a final before, but Stevie J and Shane Mumford certainly have, and both played the first quarter like men hell-bent showing their young teammates how these big games are meant to be played. A cross-town rivalry that has often seemed far too sedate, simply exploded in a tough and fiery first quarter, that saw Josh Kennedy leave the ground after a knock from that man Stevie J. Mumford was busy getting into a wrestle with Franklin, and he also took out Kurt Tippett with a sling tackle that will be looked at.

The Giants were keen to show that they had the muscle to match it with their bigger, more hardened rival and by the time the quarter time melee broke out – and Franklin and Stevie J threw jumper punches – they had made their point. Despite The Giants obvious intent, the Swans still looked a little cleaner in the first half, getting great run off half back from the continually impressive Aliir Aliir.  At half time it was still The Giants by a narrow 2 points, but the game was set for an epic finish.

They say the third quarter is the premiership quarter, and this one could eventually be seen as the quarter the Giants set up their first premiership. After a controversial mark wasn’t paid in front of goal to Issac Heeney, the Giants flew the ball up the other end to get Jeremey Cameron the first of his 3 goals in a row for the quarter. Cameron was simply supurb, and depsite being a rather strange and inconsistent figure through out his career so far, he showed once again that when he is ‘on,’ nobody can stop him; not even All-Australian Dean Rampe. The real champs do it in finals, as Buddy Franklin could normally attest to, but today he was held goaless by the very underrated Phil Davis.

At the final break it was the Giants by 21 points, and when Stepehn Coniglio kicked the first of the last, Sydney’s chances of a comeback looked slim. The  Giants finished just as strong and out ran, out tackled and out muscled the more experienced Swans to hold on for a historic win. More importantly than just the history, it gives them a weeks break and a Preliminary Final at Spotless Stadium.

History would suggest that The Giants are now a real chance at going all the way, and if they do, this game will be remembered as the catalyst. As for Sydney, well, it’s going to be pretty tough from here, with Adelaide and Geelong standing in their way of even seeing a Grand Final.

GWS: Stevie J didn’t get the return for his efforts (kicking 0.5), but his intensity set the tone for the match. Jeremy Cameron turned the game in 10 minutes, although he was still a bit wasteful, finishing with 4.4. Tom Scully has really developed into a hard-working footballer, while Coniglio, Shaw, Greene and Whitfield also impressed

SYDNEY: Dan Hannebery and Josh Kennedy did what they normally do, Aliir Aliir halted a lot of forward entries and Tom Papley was dangerous with a couple of goals.

“From the outset; we played against a very good football team today.”  – John Longmire

AFL Round 11: No tanking and no ducking… apparently.