Round 3 kicked off with Port hosting Essendon, and despite a bright start from Essendon, it wasn’t long before Port jumped out to a big lead, with their tackling pressure and their pace spreading from the contest too much for the Bombers to handle in what was a one-sided first quarter. The Power took a 6 goal lead in to the first change, and were never headed. To their credit, the Bombers didn’t throw in the towel, and after a good scrap in the 2nd and 3rd quarters, broke even in the last. Gray was brilliant for Port, with 30 possessions (22 contested) and 2 goals, Wines was tough in the clinches all night as well with 15 contested possessions, 9 tackles and a goal to his name.  No surprises for the Bombers – with Zach Merrett and David Zaharakis again in the best.

St Kilda celebrated the 50th anniversary of their sole premiership in style, with a solid 29 point win over a poor Collingwood at the MCG. Leigh Montagna was everywhere for the Saints, with 40 possessions, and Newnes was solid as well. For the Pies, it was a mostly disappointing performance – Pendlebury and Adams were probably their best, and Cloke kicked a couple as well – but too much was left to too few, and they got blown away in a third quarter blitz from the Saints – who kicked 6 goals to one, and the Pies couldn’t really mount a challenge in the last despite the Saints only having one fit player left on the pine at the final siren.

The Tigers slipped to 1-2 with a disappointing loss to an impressive Crows outfit in front of just 30,000 people at Etihad Stadium. As with the two previous matches this week, it was high pressure and skillful, fast ball movement that got the job done, as the Tiges simply couldn’t match the Crows in the middle of the ground. Scott Thompson was his usual self, with 28 possessions and 2 goals, while Brodie Smith provided some quality outside run. Jack Riewoldt was poor for the Tigers, and had his colours lowered by Daniel Talia, however Captain Cotchin stood up after a week of what I think was really quite unfair scrutiny. Ellis and Houli were good for the Tigers as well, however the Tigers constantly turned the ball over as they were getting into scoring territory, and the fast rebounding Crows continually capitalised on Richmond’s mistakes.  The Tigers travel to Perth to take on the Eagles next week, in a venue where they have played well the last couple of times, but a loss would see them slip to 1-3, with a massive challenge in front of them to play finals. The Crows take on the Swans at home, and a win would see them move to 3-1.

Speaking of the Swans – they got the metaphorical chocolates against the Giants in the first Battle of the Bridge (could we please rename this???) for the year. Another workman like, solid performance from the Swans midfield quartet of Parker, Kennedy, Hanneberry, and Jack meant there was plenty of ball going forward, and Buddy took full advantage with another bag of 4, in what was an entertaining match up with Phil Davis. Both players had games that could see them in the votes come Brownlow night, as both were influential for their teams. The Swans go to 3-0 ahead of the Crows next week, and the Giants slip to 1-2, with a game against Port next week. PattonWatch: only 7 possessions – but 2 goals. Still not giving the output that would have been expected from him, and isn’t having a massive impact on games. Tradebait.

The Suns once again outlined why they will be finals contenders, with a scrappy 9 goal victory against a poor Carlton side. The Suns are 3-0 for the first time in their brief history, and you would imagine they will beat the Lions next week to go 4-0.  Big Tom Lynch kicked 4, and Ablett, Hall, and Martin were amongst the best – their skills a cut above anyone else on the ground, as the game was reduced to a pretty ugly match. Carlton were in damage control almost from the start of the match, and tried to play a pretty dour type of football. Under Bolton, the Blues are a lot tougher in the midfield, but they still have a real lack of polish at either end of the ground, which is going to see them conceding big scores, and struggling to kick one of their own. Just 5 goals from the Blues would be concerning to their supporters, who haven’t had a decent key forward since Big Fev. Of even more concern for Carlton would be the fact that they tackle the red hot Bulldogs next week, and they look certain to slip to 0-4. No 1 draft pick Jacob Weitering again put many of his teammates to shame with his marking and composed ball use, and you can’t help feel that this kid is going to be a star of the competition sooner rather than later. Reminds me a lot of Harry Taylor actually.

The derby. Well, it was a match I suppose. Not exactly an advertisement for Australian Rules football though. The wet conditions, and high pressure midfields of both teams made for a lot of basic skill errors and turnovers, and neither side could gain any real ascendancy in the midfield. Kicking for goal was poor – just 20 goals kicked from 51 shots on goal. For the Dockers, Pav and Fyfe were again their best players, while Sandilands had his lung punctured courtesy of a Nic Nat (k)Nee. The Eagles best was again Matt Priddis, who capped off his 200th game with his 2nd Ross Glendinning Medal. Darling was also in good touch,  taking 8 marks and kicking 3 goals. It doesn’t get any easier next week for the Dockers, as they are a real chance to lose to North at Etihad and slip to 0-4, while the Eagles will take on a desperate Tigers side at home.

So to Sunday’s matches – and North took on the Demons down in windy Hobart. The Kangas won the toss, and elected to kick with the howling gale – and it wasn’t long before they’d skipped out to a 7 goal lead and we all thought that Melbourne’s loss against Essendon was set to become their second worst loss of the short season. But to the Dees credit, they turned around a 36 point quarter time deficit to lead by 7 going into half time. Gawn and Goldstein were putting on a heavyweight clash for the ages, and Boomer Harvey was enjoying a reminder of his early years, as the high scoring, wind affected match started resembling something from the 90’s. The Roos skipped away again towards the end of the third, but Melbourne once again pegged them back in an exciting 4th quarter. Once again North pulled away in the last quarter, and looked to have seen off the Dees, but once last effort from the Dees had them just 5 points down with 22 seconds to play, and had the kick from Bugg hit the target on their last foray forward, young Billy Stretch may have had a shot after the siren to win the game for Melbourne. As it was – the kick just missed the target, and Stretch had a flying snap on (or just after) the siren which missed everything, and North Melbourne held on to win by 5 points. This was a really exciting, open game of footy, and both teams should be commended on the way they played. Melbourne will feel aggrieved not to win, as they had 32 more contested possessions, won the clearances by 17, and had 12 more inside 50’s, however North would have been unlucky had they lost – as they led for approximately 75% of the match. They stay unbeaten and face Freo at Etihad next week to try and go 4 and zip. The Dees get the Pies at Collingwood, and if they can find consistency – will be a real chance for a victory.

Just when you thought you’d seen match of the round – the Hawks and Bulldogs put on a ripper at Etihad.  The Hawks kept the Dogs quiet early, and they slowly but surely moved out to a 5 goal lead early in the second quarter – however from that point on, the Dogs looked a different team – their trademark run ‘n’ gun style sizzling up the turf at Etihad as they enjoyed a 7 goal to 2 period about 15 minutes either side of half time. The last quarter was a good old fashioned arm wrestle, and the Hawks found yet another hero, as James Sicily stepped up in just his sixth game to nail 3 goals, including the winner in the 34th minute of the last quarter, after The Package Jake Stringer had given the Dogs the lead with less than two minutes left on the clock.  Sadly, Bob Murphy went down clutching his knee with just seconds remaining, and coach Luke Beveridge confirmed after the game that it doesn’t look good for Murphy. The club is bracing for news that Murphy has torn his ACL, which will mean the end to this season, and possibly could mean an unfortunate end to the popular skipper’s career. The injury leaves a sour note on what was an otherwise pleasing night for the Dogs – they came up against the measuring stick of the competition – and proved they were up for the challenge. Meanwhile – Hawthorn keep being Hawthorn, and the notoriously slow starters are 2-1, and haven’t got out of second gear yet. They should improve to 3 and 1 next week with a win over the Saints, and you would expect the Dogs to hit back over Carlton.

In the last game of the round, Patrick Dangerfield and Joel Selwood defeated Brisbane. Or at least that’s how it must have felt for the poor old Lions, who were outclassed from go to whoa, as they lost by 69 points at Kardinia Park. The Cats took off out of the gates, kicking 6 goals to 1 in the first quarter, and were never challenged. Dayne Zorko tried hard for the Lions, but with the Lions major prime movers Rockliff and Rich sitting this one out, the Lions simply had no answer for the Cats through the middle, and now sit bottom of the ladder.

Good stuff: Nice to see the Bulldogs stand up to the challenge of the Hawks. Yes, the Hawks are without key players, but the Doggies are the real deal this year methinks. Top 4 awaits. Melbourne vs North Melbourne also get a thumbs up. 136 to 131? Brilliant. I love seeing goals kicked. More of it please.

Bad stuff: Umpires are still paying far too many free kicks, still falling for players feigning high contact, and still guessing on far too many occasions for my liking. I know we want fast footy, and less congestion – but get the calls right please. Also, Bob Murphy’s injury. Fingers crossed that it’s better than everyone is expecting.

Under the pump: Well, Richmond obviously. How a team playing under Damien Hardwick can be so mentally weak is beyond me. Freo is also under the pump too. If they are winless from four, can they make finals? Should they start playing youngsters? Do they have any youngsters worth playing? And Collingwood. It’s not quite panic stations yet – but if they lose to Melbourne next week…

Summary
Article Name
AFL: Round 3 review
Description
The good stuff, the bad stuff and all the stuff in between from round 3 of the AFL
Author
Dave Bremner
Publisher Name
Holding Steadfast 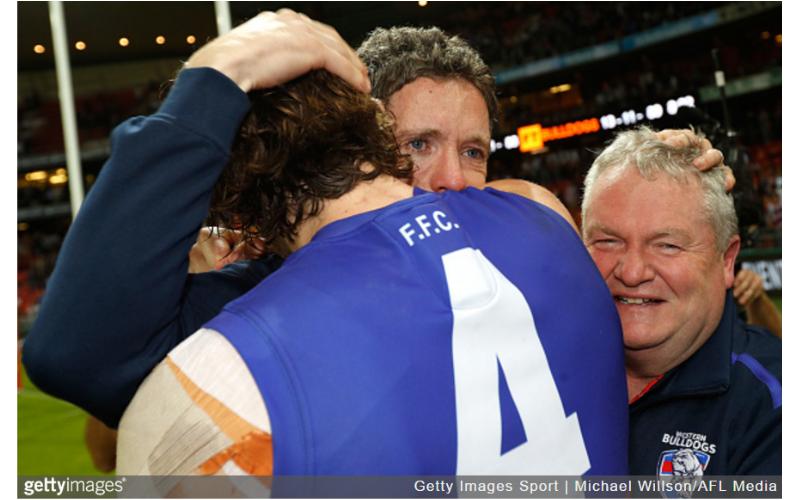 AFL Round 19 – Milestone Round